Home Mellel Store Download Update Forum Support Video
Mellel 5.1
Mellel 5.1 marks a major upgrade and overhaul to Mellel's Auto-title functionality. The Auto-title feature was completely rewritten under-the-hood, the user interface was re-invented and a new style category was added: Auto-title styles. The factory templates were revised and updated and many bugs were squashed. 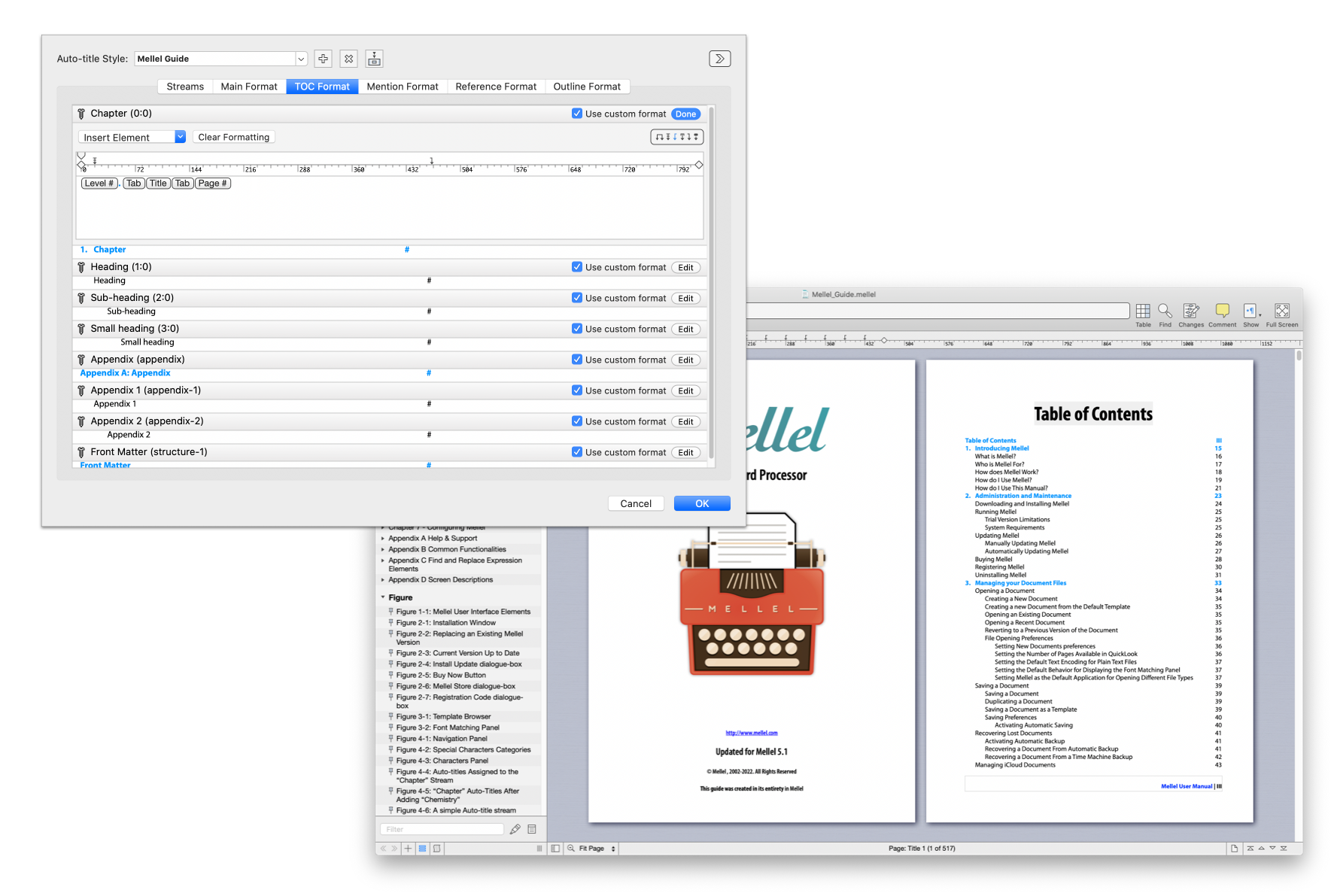 Since the dawn of ages, Mellel's Auto-titles feature was based on a single hierarchy of 10 levels, each level had an Auto-title flow whose attributes could be changed but the hierarchy was fixed and the relationship of flows to each other was either of a parent or a child. Tag flows could be added, removed and moved around in the hierarchy but the hierarchy was still very rigid. With Mellel 5.1 you can freely add, remove and move around the flows (which are now named Streams) to form any structure or hierarchy. This allows you to setup a structure where streams on the same "level" have different formatting or numbering and each can have its own sub-streams. You can find an example for this structure in the new Technical Book factory template. This template has unnumbered streams for front (and back) matter (introduction, acknowledgments etc) sections, numbered streams for normal chapter and subchapter sections and additional numbered streams for appendix and sub-appendix sections. 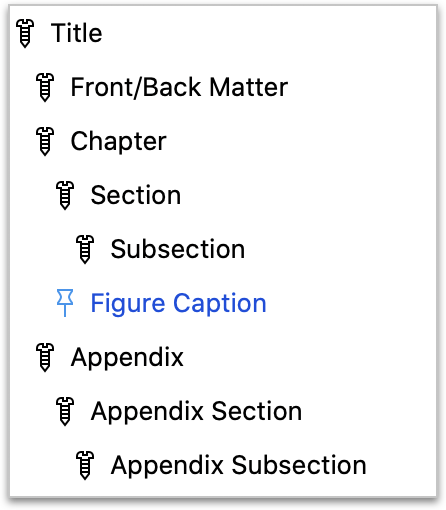 The new system enables very complex schemes but also makes it easy to make simple schemes without any extra baggage. If your document is only two levels deep, you can have only two Auto-title streams and you won't have to see or deal with an extra 8 unused levels that get in your way.

In the past, to setup/configure Auto-titles you would choose Insert->Auto-title->Edit title flows and see the screen that used to be called informally "the nuclear reactor" (because of all the buttons). In Mellel 5.1 this screen was renamed, but more importantly, it was completely re-designed in order to make it easier to understand and allow you to work more efficiently. Choose Insert->Auto-title->Configure Auto-titles to see the new configuration screen. You'll notice that this screen is now wider and uses multiple tabs. 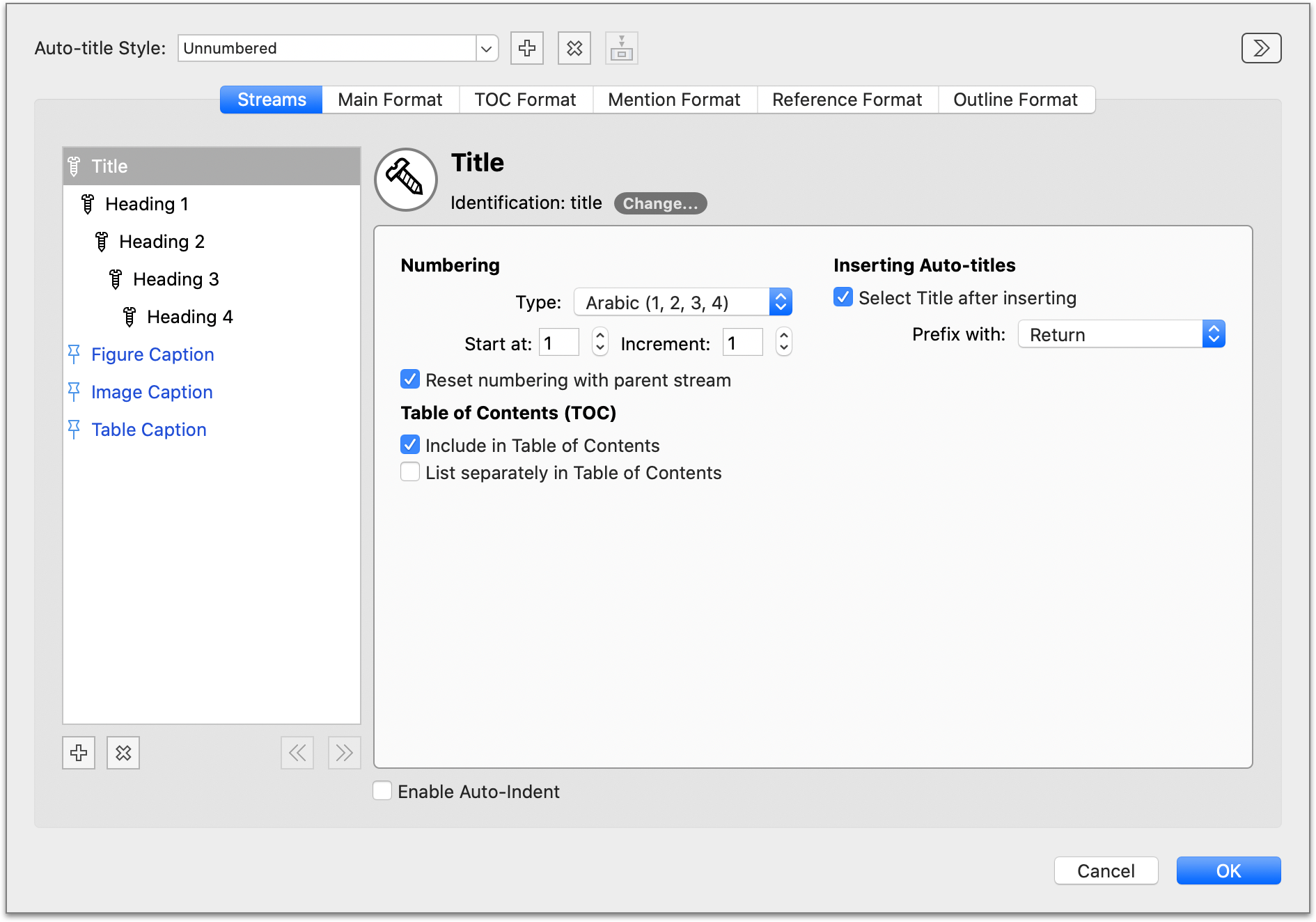 The Streams tab allows you to manipulate the streams and their attributes; you can add and delete streams, move them around in the hierarchy and modify their attributes. The other tabs are dedicated to the formats. For each format "type" (format for main text, format for table of contents, format for mentions, etc.) there is a tab, and in that tab you can see all formats of this type for all the streams in the configuration. This allows you to rapidly make changes across streams. For example, if you're working on table of contents formatting you can see the Table of Contents formats for all streams at the same time and can spot inconsistencies immediately. The window is also much wider, and this means that you no longer have to guess how things look in the actual document when editing the format. To edit a format you can click the "edit" button and the editor will open in-place. The Use a different format for type checkbox was renamed to Use a custom format and was placed outside of the editing area; this allows you to rapidly clear the custom formats used in the configuration for a format type by unchecking these checkboxes in succession. 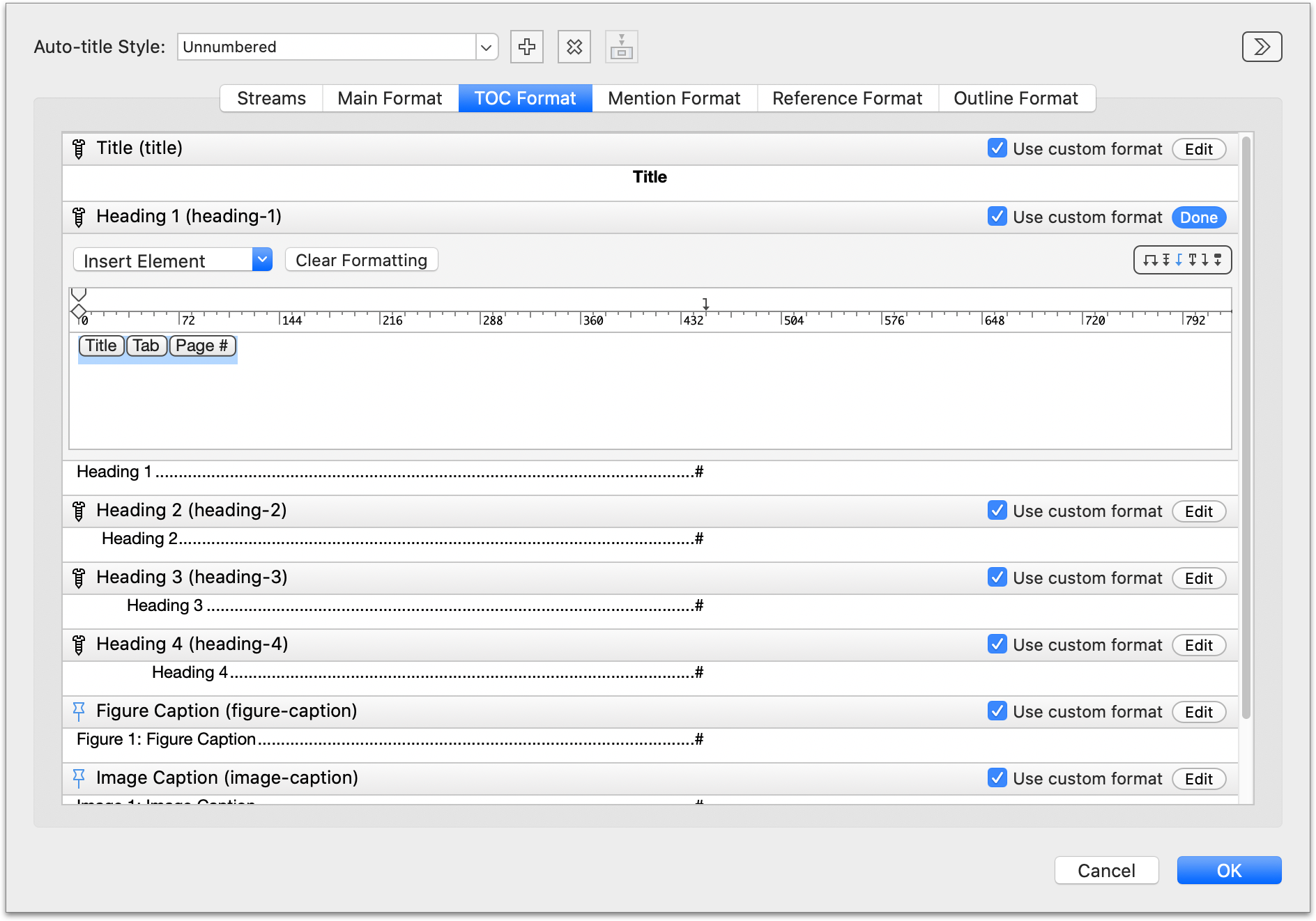 The format editor itself was revised and refined. The first thing you'll notice is that the "tokens" (placeholders) are drawn differently and that the insert element popup menu illustrates this new look. The naming is more consistent and the design change of the insert element popup and the elements themselves applies to other areas of the application where such formats are used (cross references and index). Another notable change is that instead of the rather cryptic prev# to signify a parent level we're now using the term parent, and when you click on such items to choose which level is used, the actual stream names are shown in the menu.

Another addition to format editing is the Clear formatting button which allows you to clear all formatting (character and paragraph styling) from a format with one click. One refinement that is subtle but powerful is that you can now add and edit character and paragraph styles directly from the format editor (this was disabled in the past). For example, you can fine-tune your paragraph style for a table of contents format moving around tabs and then save the changes to the style via the paragraph palette directly from the editing pane of the format. Finally, special attention was paid to dealing with invalid formats. This is an issue that can happen when you move around a stream in the hierarchy. If you have a stream with a format that contains parent items and you move it to a lower level, the parent items may become invalid since the hierarchy is not as deep. When that happens, Mellel will indicate the issue by showing a warning icon next to the stream name in the "General" tab. Clicking on this icon will popup a dialog allowing you to fix the issue with a click or jump to the problematic format for manual editing. 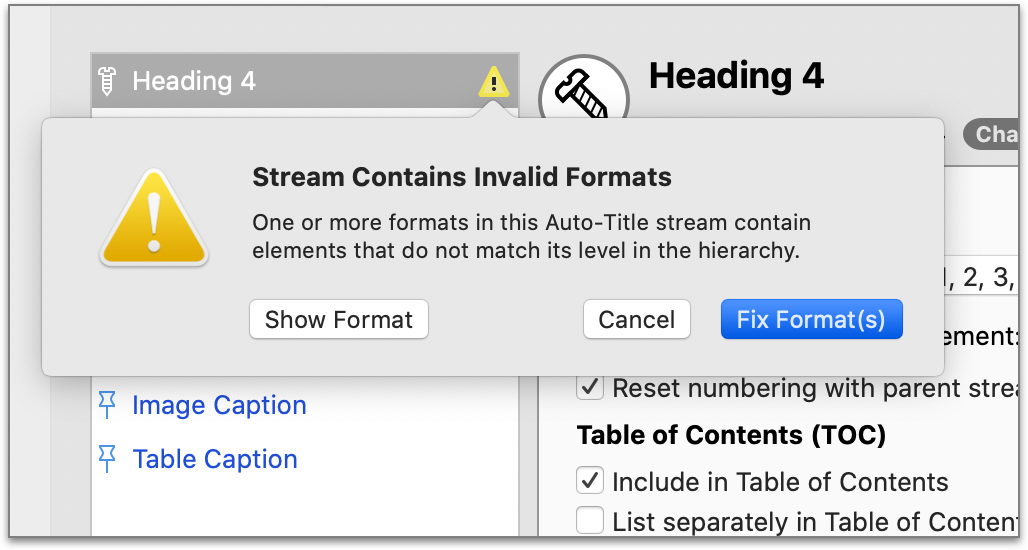 In the past it was possible to store all the Auto-title settings as global entities called Setups. This was a useful thing to allow you to share your setup work between documents but was also very troublesome because the setup couldn't be associated/connected with a style set and this is needed as the Auto-title setup contains many paragraph and character style references. This led to the phenomenon where applying a style set on a document could lead to many detached style references in the document (aka "diamonds"). 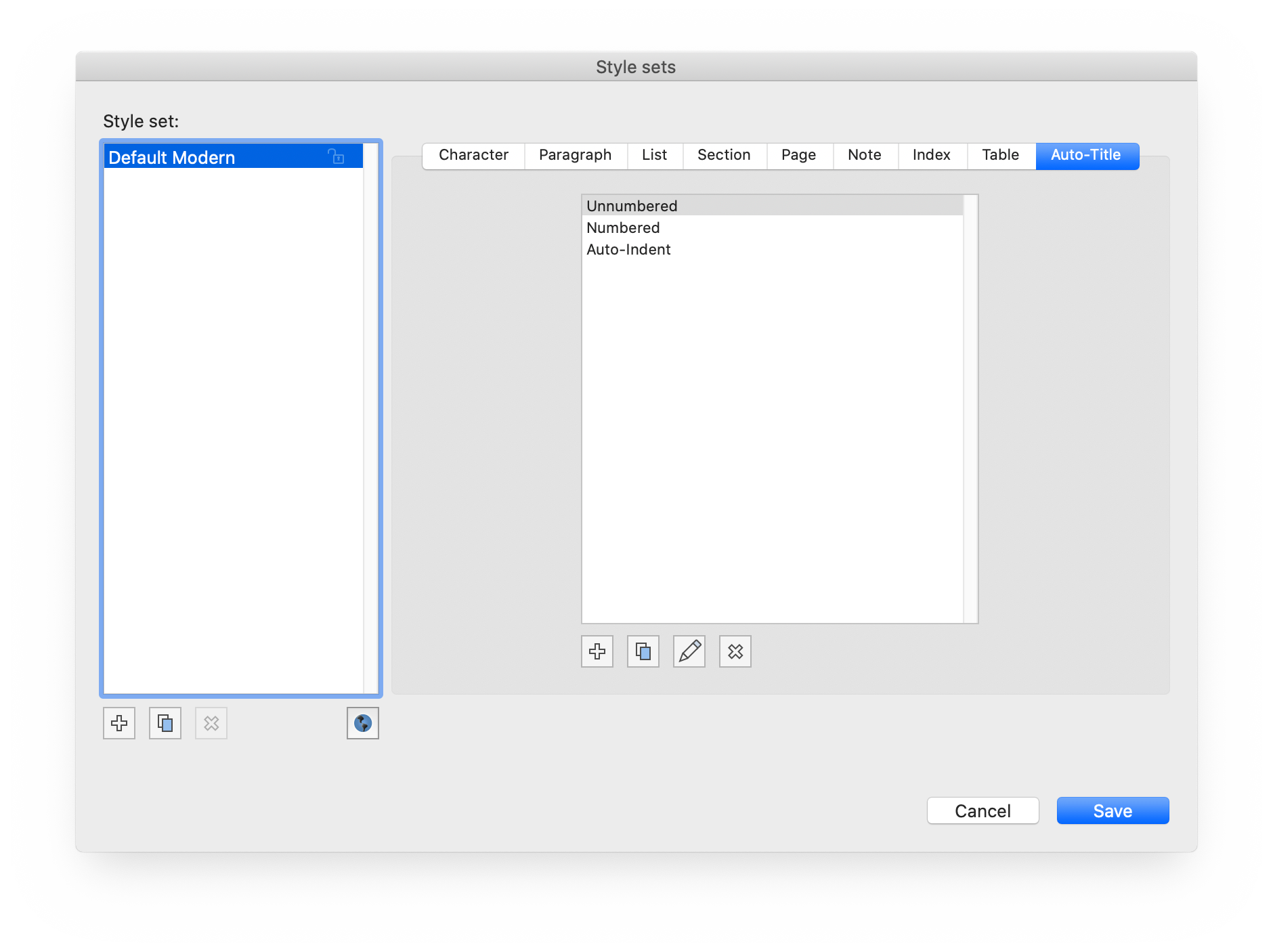 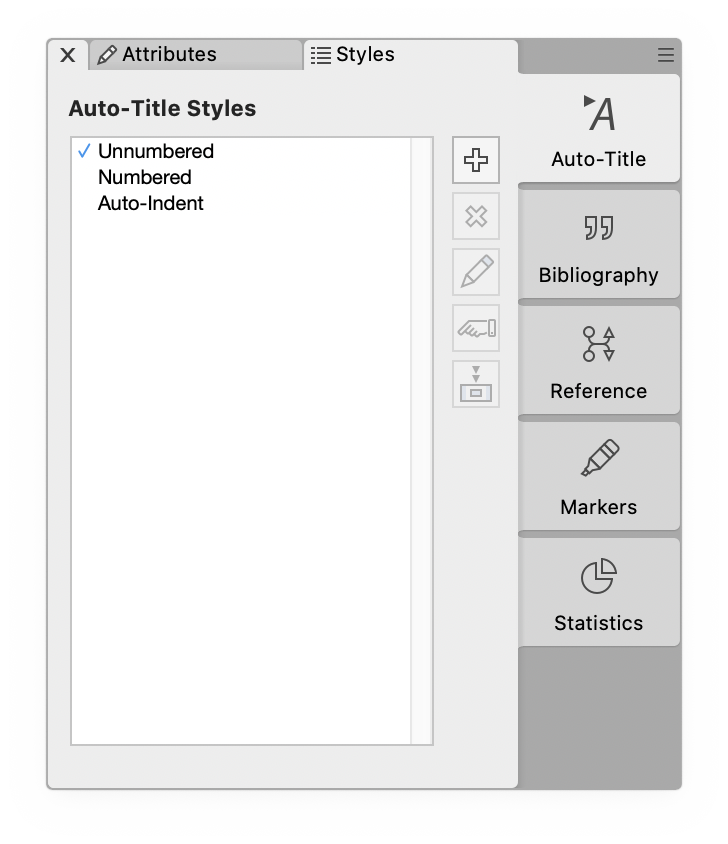 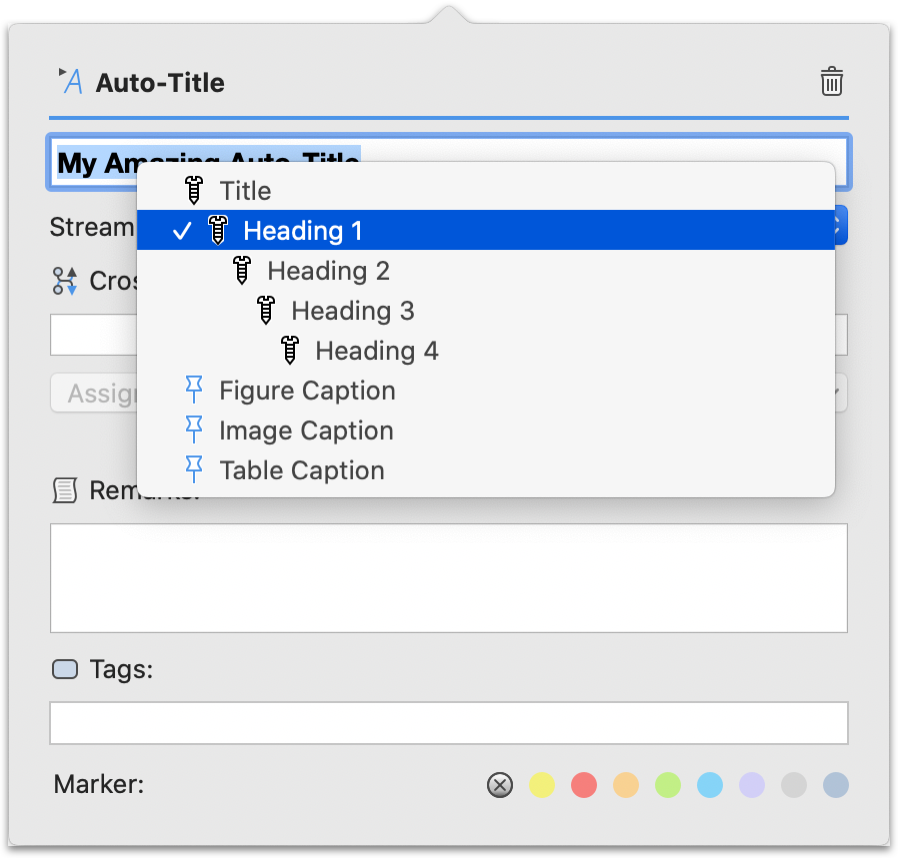 - The Insert and Change menus and popup menus for Auto-titles are now indented to show the hierarchy of streams, they also contain icons to differentiate structure and caption (tag) streams. 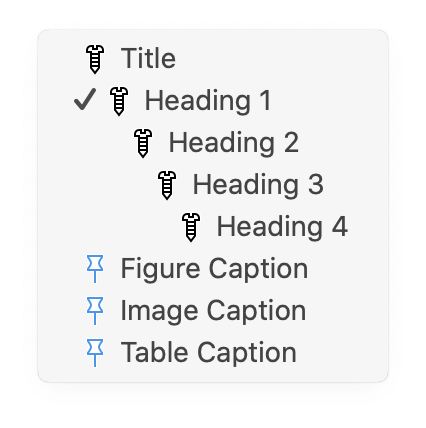 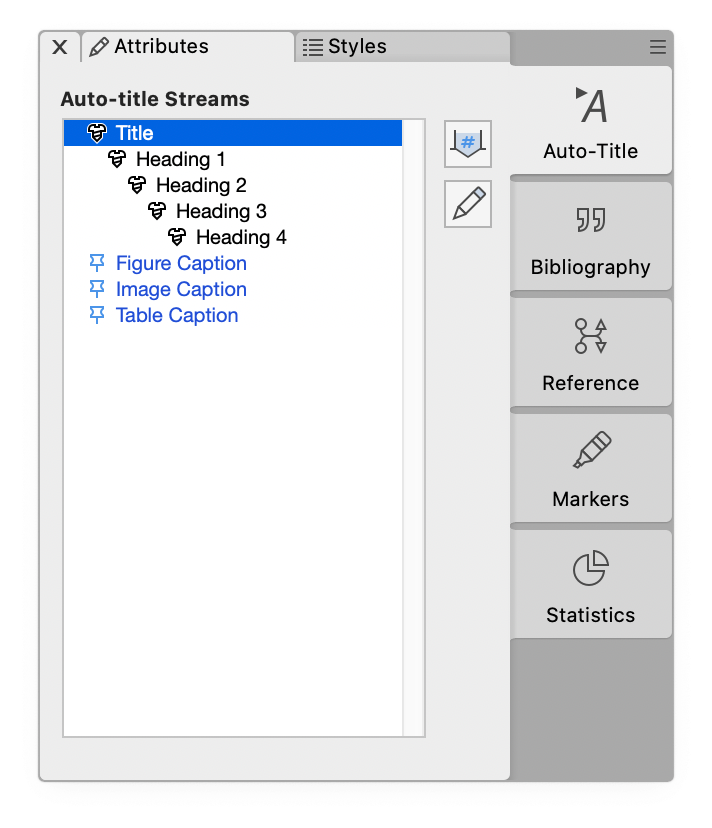 Mellel always allowed you to set a prefix character for Auto-titles. This character is inserted before the Auto-title, but because it is not strictly a part of the Auto-title, it wasn't always kept in sync with the Auto-title leading to inconsistant formatting. After changing stream attributes, the appropriate prefix character is applied or removed before Auto-titles belonging to the modified stream. This is not new but is done in a smarter way and is much more consistent. When changing an Auto-title stream, the prefix is changed as well, if necessary. This was not done in the past and applies to all ways of changing the stream of an Auto-title including choosing a stream from the Change context menu, applying a stream from the palette, promoting or demoting in the Outline and more. Prefix is properly handled when editing a document structure via the outline. If you drag a section in the Outline, the prefix for the section is carried along with the section, and when you drop the section it is inserted in a way that will not disturb the prefix of the Auto-title at the destination. When inserting an Auto-title right before another Auto-title, the prefix of the existing Auto-title is kept with it. For example, if you have one stream with a page break prefix and you insert an Auto-title from a different stream with a return prefix right before it, the new Auto-title will be inserted before the page break and so the existing Auto-title retains its location directly after the page break.

Mellel's "factory" (or built-in) templates have been revised to accommodate the changes in Auto-titles in addition to making things more consistent and clear. The blank templates are now called blank instead of the less descriptive default. There are two varieties of blank templates: - Modern - using a sans-serif font for body text and titles. - Classic - using a serif font for body text and titles. Each variety has two templates, one with A4 page size and the other with US Letter page size. Style names across the blank templates are the same and each template contains three Auto-title styles: Unnumbered, Numbered and Auto-indent. The stream structure (and stream identifications) in all three styles are the same to allow easy switching between styles. All three Auto-title styles should allow production of a table of contents "out of the box" without the need to tweak tab positions. 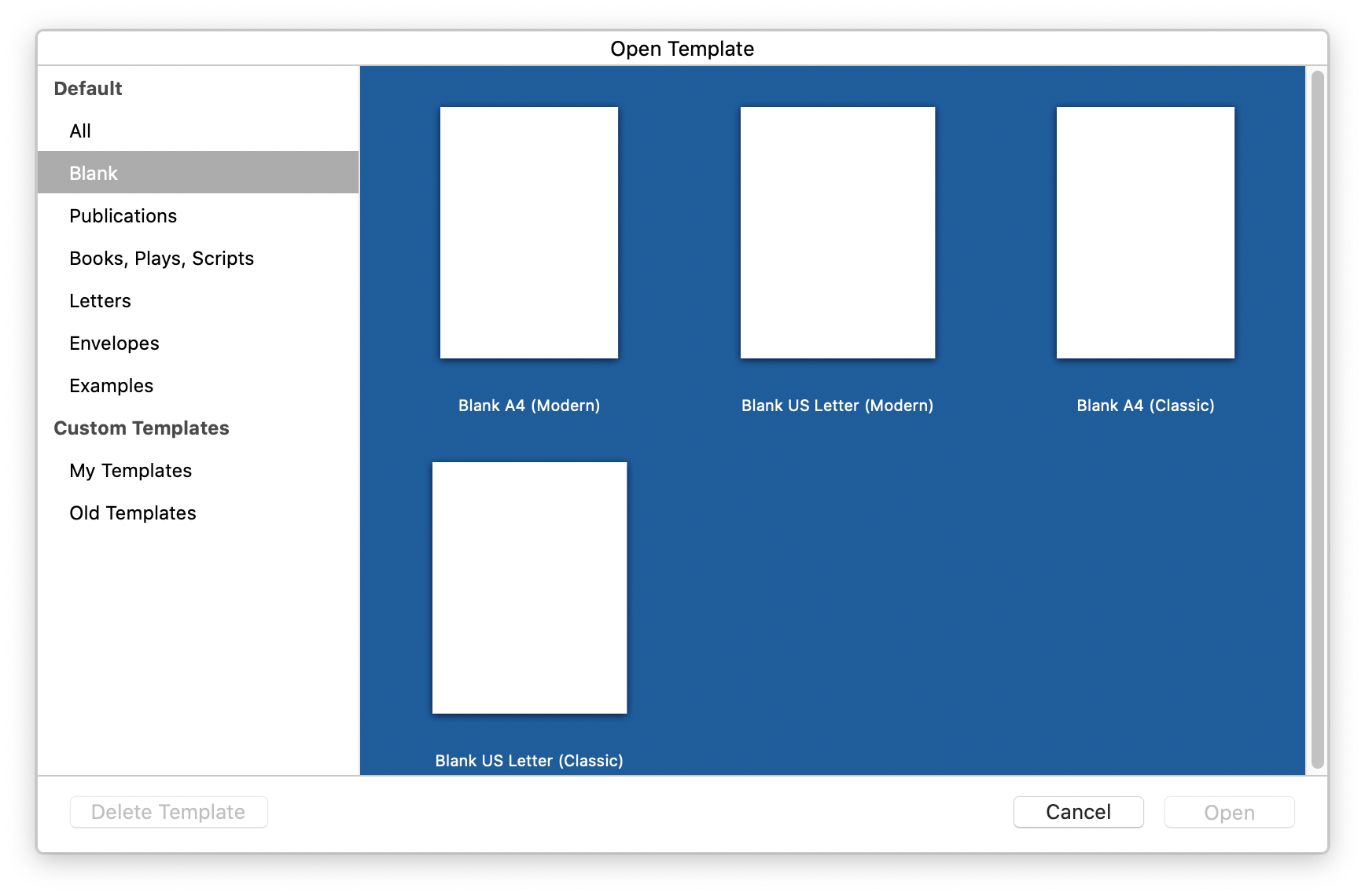 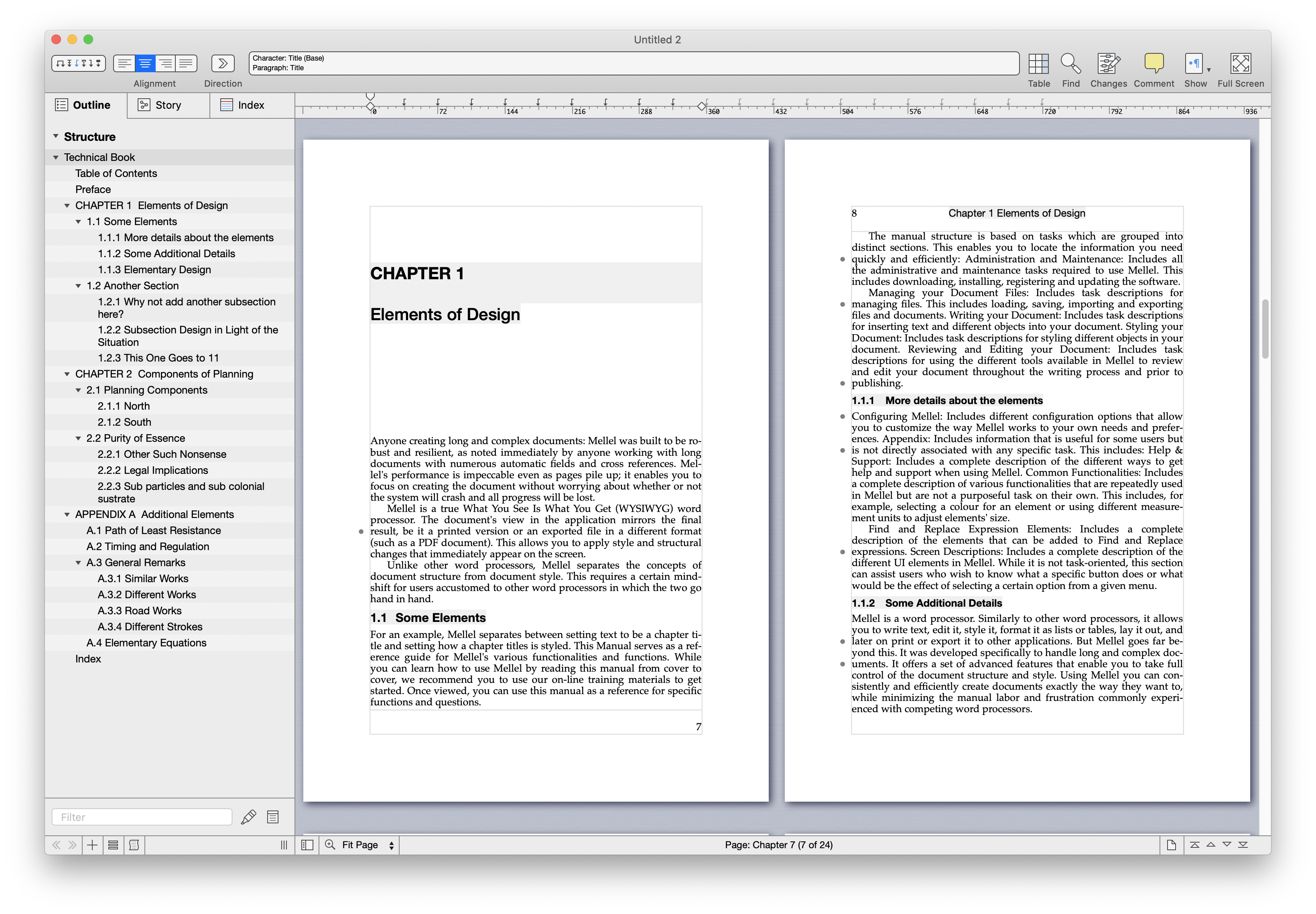 - The Newsletter template category was renamed Examples. - A new template, Legal was added (Actually it is replacing the A4 Auto Indent template) and it demonstrates a pseudo legal document using Auto-indent.

The following is a list of all the new features and improvements in Mellel 5.1:

New Blank Templates: - Replaced "default" templates with four "Blank" templates with two page sizes (A4 and US Letter) and two style sets (Classic and Modern). - Unified naming of Auto-title streams and paragraph and character styles. - Three varieties of Body paragraph style, normal, double-spaced and Auto-indent (for use with the Auto-indent Auto-title style). - Three Auto-title styles: Unnumbered, Numbered and Auto-indent. All three styles use the same stream identifications so you can switch around between them without converting Auto-titles. - Five note styles, three for footnotes (Arabic, Asterisk, Roman) and two for endnotes (Arabic, Roman). - Default Note styles using same font size as body text and with a more conventional superscript note number. Other Changes: - New template - "Book - Technical" demonstrating a more complex Auto-title structure, table of contents and an index. - New template - "Legal" demonstrating a pseudo legal document using Auto-indent. - Renamed "Newsletter" category to "Example". - All templates were updated to the new standard for Auto-titles and a more consistent style naming scheme.

Changes to the User Manual